Messgae of Ayatollah Ramazani to Secretary-General of United Nations 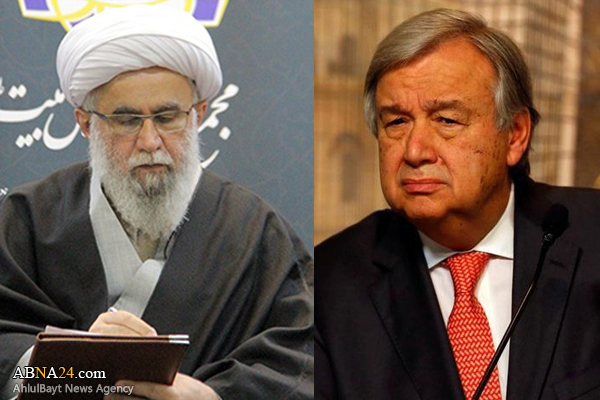 AhlulBayt News Agency (ABNA): Ayatollah Reza Ramazani, the Secretary General of the Ahlulbayt (a.s.) World Assembly, sent a letter to the UN Secretary-General, thanking him for issuing a responsible statement and "warning of a tsunami of hatred in the world following the outbreak of the corona virus."


In His Name, Who is the God of Compassion and Generosity

Distinguished Secretary-General of the United Nations

With my best compliments and sincere greetings;

Your Excellency's responsible statement and the warning about the 'tsunami of hate' in the wake of coronavirus pandemic is a worthy and commendable step. You have well pointed out some of the dangers and troubles, which I hope will be noticed by the world.

Today, the international community is under threat in many ways. The security threats that threaten peace, the economic threats that cause the collapse of social systems and the development of poverty, and the health threats posed by the coronavirus that endanger the health of many people. This is one of the most important concerns of countries in today world. Most threats are posed by arrogant states, but it is people who suffer from harms, especially those living in developing or less developed countries.

Now that humanity is plagued by the global outbreak of the ominous coronavirus, it must first be seen as a pervasive popular problem far from political considerations. Secondly, a collective and global action is to be taken to create a culture of altruism, justice and peace in the world. Today, more than ever, humanity is tired of the oppressive and arrogant pressures, and thirsts for justice, peace and peaceful coexistence.

Officials from international organizations such as the United Nations and the World Health Organization, etc., should do their utmost to fulfill their legal and organizational obligations to combat this vicious virus. Governments around the world should try to block the spread of the virus and treat patients, the mass media must diligently seek to inform the public, and competent physicians and specialists have to try to find the vaccine.

Denying hatred and preventing its spread today is a human and universal duty. Part of this hatred stems from the avarice of arrogant powers, and the media empire that dominates public opinion is the most important factor that fans the fire in this battle. Intensification of hatred between blacks and whites, Muslims and non-Muslims, Shiites and Sunnis, etc., is the result of the arson of some politicians who, through these flames of hatred, are flourishing in the arms market and their warmongering efforts.

In our opinion, paying attention to the innate truths of religions and turning to divine teachings is one of the most important ways to cure these hatreds. Undoubtedly, Islam and other divine religions call for the sustainable and deep development of relations between human societies and constructive interaction among them. We believe that the school of Ahl al-Bayt (the infallible Household of the Holy Prophet of Islam), which has presented a human model of religion by combining religious rationality and divine, can respond to the serious gaps of human societies.

It is a matter of pride for me to inform you that as you know, following the outbreak of this disease, large-scale popular movements were formed all over the world. In particular, numerous initiatives and humanitarian actions have been taken among Muslim communities and followers of the Ahl al-Bayt (a.s.) and Shiite communities, which aroused empathy and sympathy among the people. The astonishingly responsible and honest actions of the medical and nursing staff in the Islamic Republic of Iran and the efforts of various walks of life, clerics, and religious centers in this regard were remarkable examples; while the Islamic Republic of Iran encounters many problems due to the pressure and oppressive threats imposed by the United States.

Today, all the followers of Ahl al-Bayt and Muslims, as well as the Islamic Republic of Iran, have some valuable experience in preventing and combating the spread of this disease and can provide it to other countries in need. Today, honest and altruistic interaction and cooperation between all countries of the world is very important and even necessary and incumbent upon us.

Muslim communities in different countries of the world have taken appropriate measures in a spontaneous move to provide relief and charitable assistance to the needy.

In some countries, however, the spirit of savagery has been shown, where we have witnessed the theft of health items such as masks and disease detection kits belonging to other countries.

I express hope that Your Excellency, as well as other officials and managers of international institutions, especially the World Health Organization and the Commission on Human Rights, will make serious efforts to respect the inalienable human rights and to end all forms of oppression and inhumane treatment by the arrogant governments of some countries.

You certainly agree that in the current situation and at all times, non-governmental organizations such as the Ahl al-Bayt (a.s.) World Assembly provide the world with a very valuable and effective capacity to combat any problem facing humanity. Therefore, it deserves if Your Excellency along with all statesmen and managers of international institutions pay attention to this important matter, and facilitate the fields of cooperation and interaction among all the people of the world to resolve the conflicts, oppressions and injustice, and to promote altruism, peace and peaceful coexistence.

May we witness the blossoming of love, justice and peace around the world;