“Shiites could not have lived normally if the idea of resistance had not been accompanied by scientific development. The Resistance Front in Syria, Iraq and Lebanon has established the true position of the Shiites in the region and in the world,” stated the Secretary General of the AhlulBayt (a.s.) World Assembly. 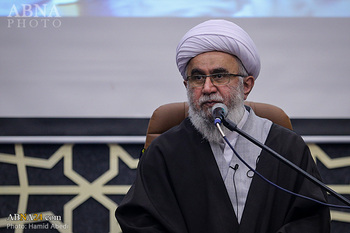 During his visit to Syria on Thursday, February 25, 2021, the Secretary General of the AhlulBayt (a.s.) World Assembly met Hojat al-Islam Sayed Abdullah Nezam, the President of the Assembly of Hazrat Fatemeh Al-Zahra (a.s.).

“Michel Foucault believed that there would never be a religious revolution and that all revolutions would be secular and atheistic. But the Islamic Revolution of Iran rejected his theory and caused him to change his theory. Previously, Muslims did not have scientific power and global status and were considered third world and underdeveloped countries. But today, Islamic centers have expanded in the world. In Germany, for example, there were 100 Islamic centers, which has grown to 200 today. We are faced with the quantitative development of Islamic centers. But, more important than quantitative development, we need the qualitative development that exists. It is also one of the most serious discussions in scientific centers of the world such as Harvard, Cambridge and Sorbonne, are Islam and approaches to understanding Islam,” Ayatollah Reza Ramazani stated in this meeting.

“In the past, Muslim countries and cities were the center of science, but the West stole this science from Muslims and now rules the world with it,” added the Secretary General of the AhlulBayt (a.s.) World Assembly.

“Thanks God, the Islamic Republic of Iran, has been able to achieve an important scientific position. For example, in the medical sciences, Islamic Iran was able to produce the covid-19 vaccine, and in the next few months, this vaccine will overtake the French and British vaccines and will become international,” He said about the progress of the Islamic Revolution of Iran.

“Shiites could not have lived normally if the idea of resistance had not been accompanied by scientific development. The Resistance Front in Syria, Iraq and Lebanon has established the true position of the Shiites in the region and in the world,” Ayatollah Ramazani said about the position of thought and the role of resistance among Shiites.

“Allame Mujahid Sayed Hassan Nasrallah, the Secretary General of Hezbollah in Lebanon, has a precise speech that gave me double morale and dignity. It was that “We will not allow Hazrat Zainab (a.s.) to be captured again.” This shows that the Shiites resisted the extremist elements with all their might. Let us remember the martyrs of the resistance and the honorable martyr, Sardar Haj Qasem Soleimani, for whom the funeral of a large number of people in Iran and Iraq was held. The funeral procession of the martyrs of the resistance shows the people’s acceptance of the culture of resistance and brought to fruition the words of the late Imam Khomeini, who said that “America can do no wrong”. Today, thanks to the struggles of the warriors of Islam, the power of resistance has increased and the enemies can do nothing,” he stated.